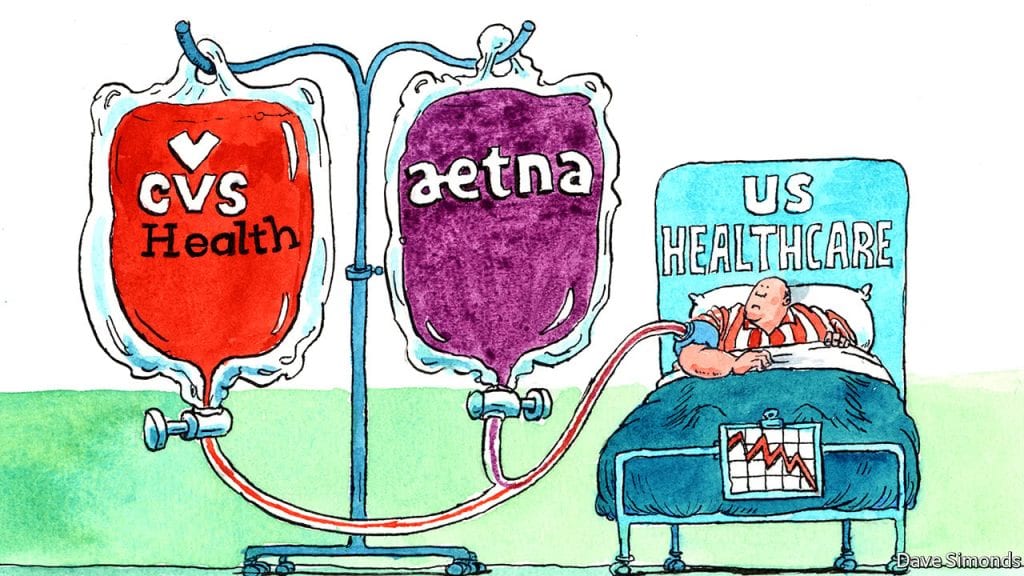 The CVS-Aetna Merger Hinges on One Question: What Do Consumers Get Out of It?

The proposed merger of CVS and Aetna will test what it means today to create value in business. Shareholders may gain, but will consumers? The Department of Justice (DOJ) will be setting important case law with its treatment of this vertical merger. And, in the end, we consumers will learn if these kinds of mergers are, literally, good for our health.

The crux of the matter is whether vertical mergers — between a buyer and its supplier — are better for consumers than horizontal mergers between two sellers. In the health care arena, horizontal mergers seem to have run their course: The proposed mergers of insurers Aetna and Humana, and of Cigna and Anthem, were challenged by the DOJ and withdrawn, as was Walgreens’s proposed acquisition of Rite Aid. Among hospitals, too, consolidation may have peaked. In Boston, Partners Healthcare was blocked from acquiring three large suburban hospitals. In all these cases, the antitrust authorities argued that further combinations among firms in the same market would hurt consumers.

Those were, in a way, the easy calls, backed by traditional economic theory and well-established antitrust practice. Evaluating vertical mergers is trickier.

When two separate firms with market power occupy successive positions in an industry value chain, both will try to earn a profit margin over their costs. As a result, they may end up raising prices to consumers more than if they were one firm, with one profit center. Economists call this the double margins puzzle. The simple version of this puzzle leads to the strange conclusion that one monopoly is better than two, not just for shareholders but for consumers.

If CVS and Aetna were to follow this reasoning, they would need to show that integrating Aetna’s insurance arm with CVS’s Caremark pharmacy-benefit arm would increase their efficiency and lead to lower cost of health care for consumers.

The first part of this argument would be that the merger would improve the coordination between these two parts of the industry chain. Exhibit A for them will be the current spat between Express Scripts and Anthem, a pair of companies that occupy similar positions in the chain as do CVS and Aetna. Until recently, Express Scripts and Anthem were partners, tied not through common ownership but through a multiyear contract. Their partnership recently ended up in court, with Anthem suing for $15 billion that it claims it is owed from savings that its partner achieved but did not share. Express Scripts countersued, of course, after having offered a settlement of $2–$3 billion, saying it had no more savings to share.

This is a classic problem in contractual partnerships. When the partners depend on each other and also have bargaining power over each other, they often end up haggling over the surplus after the fact. It’s kind of like sumo wrestlers trying to dance. For bystanders, it’s often not pretty.

CVS and Aetna will argue that they will avoid such fights if they are under common ownership. In addition, they will argue that their combination will give them power to wrest cost reductions from pharmaceutical suppliers and hospitals. All this would benefit their shareholders, but would it also benefit consumers?

This is where the DOJ will have to sharpen its pencils. What incentive would there be to force the newly merged entity to share its savings with consumers?

Enter the Amazon bugaboo. These days, it seems that whenever Amazon says “boo,” all manner of proud companies buckle at the knees.

Last month, just before the Wall Street Journal reported that CVS is looking to buy Aetna, CVS’s stock sank on news that Amazon had acquired licenses to operate as a pharmacy wholesaler in a dozen states. The news about the possible merger brought CVS’s stock right back up (and boosted Aetna’s, as you would expect).

The mere threat that Amazon would enter this business was enough to scare investors, and probably accelerated CVS and Aetna’s talks. And that threat is likely to help shape whether the merged company would share its newfound surplus with consumers. If Amazon follows through, consumers will benefit.

But the last time this argument was used to defend a merger, it failed in court. Last year, Staples and Office Depot argued that they had to merge their chains, because Amazon was looking to enter their lucrative B2B business. The DOJ challenged that argument, questioning that the Amazon threat was real, and it won in court. The merger was shelved. That was a horizontal merger between the #1 and #2 player in the market, so perhaps the deck was stacked against it.

This vertical merger will be murkier, but perhaps more consequential. And it is not alone — AT&T’s pending merger with Time Warner is also a vertical one. There, too, the impact on consumers will be hard to pin down, even when shareholders on both sides are happy with the deal. But that merger is only about entertainment, or, at most, news. The CVS-Aetna deal will affect the health of millions, for better or for worse.